Schendt Engineering Corp. and Hawk Contracting worked together under a design-build contract to construct a new bulk liquid oxygen system to replace the existing system for the hospital. The existing system consisted of a single liquid oxygen tank, two vaporizers and regulators with oxygen gas cylinders for emergency back-up. The project required maintaining the existing oxygen system operational during the construction of the new system.

The primary tank vaporizers were piped in parallel with solenoid valves which were controlled by the building automation system to alternate vaporizers every 24 hours to provide a thaw cycle on each. A new pressure regulator station was installed to serve the primary and secondary oxygen tanks, and regulate the supply pressure to the hospital. A telemetry system was installed to monitor the liquid oxygen supply and pressure in each tank and send reports to the local supplier and building automation system. Low level and low pressure alarms were provided for each tank and connected to the main medical gas panels in the hospital and heat plant. These alarm signals were then transmitted from the main medical gas panels to the fire alarm panel and building automation system for remote alarming and paging purposes.

The system was installed on a structural concrete slab within an aesthetically pleasing concrete enclosure. The enclosure was provided with an access gate, lighting, and razor wire security barrier at the top of the wall on the inside of the enclosure.

The design required preparation of as-built drawings of the entire oxygen distribution system within the hospital to verify pipe sizing and system capacity requirements. 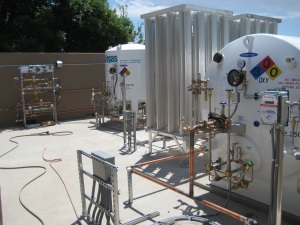 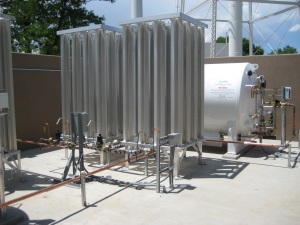 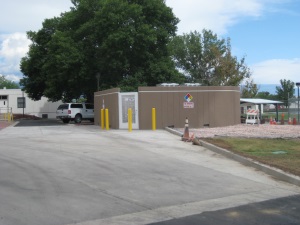