This project involved a two phase design for renovation of an approximately 45,000 S.F. office building. This renovation included a complete upgrading the HVAC systems to include a rooftop air handling unit, boilers, domestic water heater, pumps, and associated air distribution and hydronic systems.

The new air handling unit was a custom built unit utilizing an evaporative condenser. The unit utilizes two 15 ton variable capacity digital scroll compressors and 4 15 ton fixed capacity scroll compressors to provide both staged and modulated capacity control. The air handling unit has a supply and return fan and incorporates a 100% outdoor air economizer cycle. The evaporative condenser was selected as an separate piece of equipment but mounted on the same base rail system as the air handling unit in order to allow it to be replaced independently of the air handling unit in the future. Redundant VFD’s were installed for the supply and return fans and the evaporative cooler fans to eliminate down time in the event of a VFD failure. An existing screen wall on the roof remained, and the roof top unit heights were coordinated to preserve the roof’s aesthetics.

The new heating water system consisted of two high efficiency boilers with combustion air ducted directly to them from the outside. Individual primary pumps circulate heating hot water through each boiler and secondary variable speed pumps deliver heating hot water to the VAV reheat coils. These boilers are expected to operate at approximately 87% efficiency. A new condensing gas-fired hot water heater with an efficiency of 97% was also installed.

The roof top units, VAV boxes, and boilers were controlled by microprocessor based DDC controllers connected to the existing Building Automation System. 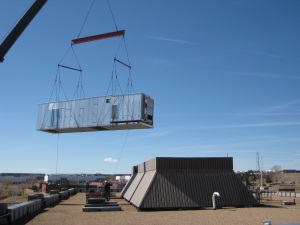 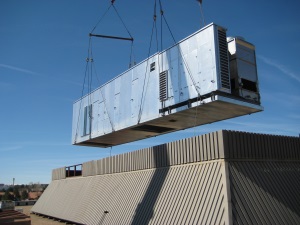