SCI was in the process of relocating to the Fountain facility which it purchased from Apple Computer. This facility is comprised of approximately 80,000 S.F. of office space, 240,000 S.F. of manufacturing space and 40,000 S.F. of warehouse space. Schendt Engineering Corp. performed a study to evaluate the process exhaust system requirements, and overall ventilation for the facility. We prepared a report outlining the deficiencies within the facility, our recommendations to correct them, and an estimate of probable cost. Construction for this project was funded immediately.

The renovations to the facility included installation of two indirect fired make-up air units to supply an additional 60,000 CFM of outside air to the building to balance the exhaust air flows and maintain space pressure relationships within the building. In addition a fresh air intake hood was installed on the warehouse air handling unit to provide 4,000 CFM of outside air to the space.

Process exhaust systems included installation of four Strobic Air exhaust fans to maximize stack height and avoid recirculation to the building fresh air intakes. These fans were constant volume in order to maintain their effective stack height. They were equipped with bypass dampers to provide variable air volume to the process exhaust system which was controlled to maintain a constant duct static pressure. Phoenix pressure independent air valves were used to maintain constant airflow at each piece of equipment to avoid rebalancing of the system each time a tool is added. Exhaust air distribution systems were modified extensively to connect the various pieces of equipment to the system. Equipment served by this system included SMT ovens along with wave machines and their service enclosures. Independent exhaust systems were also provided for Stolting cleaners, and Smart Sonic cleaners.

Enclosures were constructed on the service access sides of wave machines to contain the lead emissions associated with de-drossing the machines. Phoenix 2-position air valves were used to provide a set minimum airflow rate during normal operation and to increase the airflow during de-drossing operations. 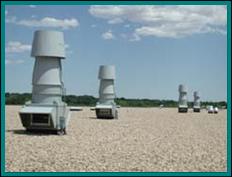 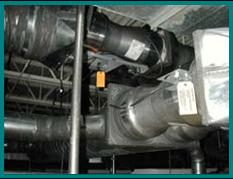 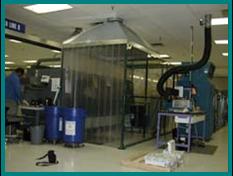