SEC was the prime design consultant on this project. This project consisted of expansion of the existing chilled water plant and construction of a new heating plant due to the split of Hewlett Packard into two companies and the need for HP site to be self sufficient.

The project is generally an expansion of the chilled water plant from 2,450 tons to 3,450 tons to support several data centers and office space on campus. The project consisted of an addition to the existing chilled water plant to house the mechanical equipment. The Mechanical portion of the project consisted of installation of two 900 ton centrifugal chillers with variable frequency drives, two 900 ton cooling towers with variable frequency drives, two new primary chilled water pumps, and three new condenser water pumps. The plant was designed to allow installation of a future thermal storage system.

A new chemical treatment system consisting of a centrifugal separator, conductivity controller and chemical feed pumps was installed for the additional condenser water system. A new machinery room ventilation system was installed with multiple refrigerant monitors in each chiller room.

Our design included developing system schematics showing all control points of the existing and new chilled and condenser water systems. We prepared an I/O summary table listing all of the new and existing control points in the plant. We prepared ladder wiring diagrams and a detailed sequence of operation for the plant.

The new Central Heating Plant is has 1,750SF of floor area and houses four stainless steel condensing boilers, three hydronic pumps, a combination air/dirt separator, two expansion tanks and an air handling unit with an integral face & bypass heating coil to preheat combustion air. Each boiler is rated for 3,360MBH with an efficiency of 90%. The condensate discharge from the boilers was piped thru floor drains to neutralization tank prior to discharge to the sanitary sewer.

New direct bury heating hot water distribution piping was installed from the central plant to the three buildings on campus. The distribution system was a pre-insulated cased piping system consisting of approximately 6,000LF of 6” thru 10” pipe. Three valve vaults were installed to provide isolation of sections of piping and branch piping to buildings. A landscaping plan was also provided to restore the site upon completion of construction. 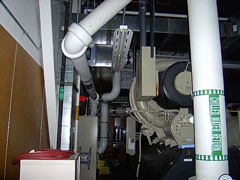 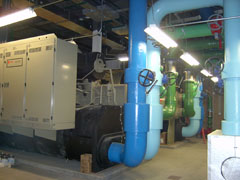