This project involved conversion of a single story high-bay warehouse space into a two story 150,000 S.F. office space. Due to the clients fast-track approach to construction, the project was broken into several phases of design and construction. The first phase involved demolition of the existing systems, construction of an intermediate floor level within the shell of the building, installation of windows, and relocation of the 10,000 S.F. DirecTv computer room within the space. The relocation of the DirecTv computer room was necessary due to its current location and the desired spatial layout of the renovated space. This relocation was accomplished without a single shutdown of the computer room facility. The second phase of the project involved design of the infrastructure required for the remaining 140,000 S.F. of space available and tenant finish of approximately 70,000 S.F. into office space. Infrastructure requirements included extension of heating hot water and chilled water piping from the central plant, installation of a new sanitary sewer within the building, and installation of six (6) custom variable air volume air handling units with primary air distribution systems. The air handling units were constructed of aluminum to minimize weight due to the limited structural capabilities of the roof. These units contained pumped heating hot water coils for freeze protection, and chilled water coils, evaporative cooling section for humidification and free cooling, 100% economizer cycle with IAQ dampers for measuring the outside air flow, and plenum type fans with variable frequency drives to minimize noise. The primary air ductwork for these units was interconnected in a header arrangement to provide redundancy in the event of a unit failure. The air distribution system utilized series fan powered variable air volume boxes with hot water reheat coils on the perimeter zones and pinch-down variable air volume boxes with hot water reheat coils on the interior zones. The mechanical systems were controlled by standalone direct digital controllers and connected to the Building Automation system. The existing fire sprinkler system was modified as required based on the new space layout. The space consisted of a combination of hard-wall offices, open office space, conference rooms, training rooms, restrooms, break rooms with kitchenettes communications rooms, and electrical rooms. The design of the office space utilized cloud type ceilings over cubicle areas with open ceilings down the isles and corridors. With this design theme, the majority of the ductwork was exposed to view. Lined rectangular ductwork with long radius bends was utilized where exposed to view and then painted to match the structure. 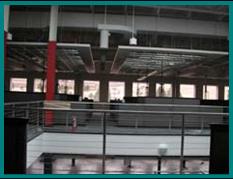 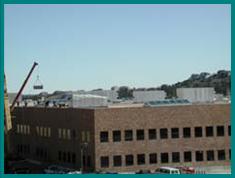 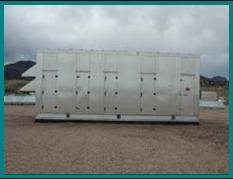