Colorado College is currently in the process of expanding their campus facilities to provide additional programs. As a result of this expansion, the campus cooling load is also increasing. At the present time they have a central chilled water plant however they also have several satellite chilled water plants dedicated to specific buildings. While these satellite plants are interconnected with the central plant system, several of the chillers in these plants are nearing the end of their useful life and utilize CFC type refrigerants. Therefore a master planned approach was needed in order to determine the best long term method of meeting future cooling loads while phasing out CFC refrigerants. This project involved the analysis of the campus cooling loads and the existing chilled water systems on campus to determine the most cost effective method to meet current and projected future cooling loads. The analysis evaluated the capital cost of construction, the annual operating cost, and the life cycle cost for each of the following systems:

From our analysis we determined that the both options had nearly an identical installed cost on a per peak ton of capacity basis. The savings in annual operating cost were relatively small due to the local electrical rate structure. Therefore the cost savings did not justify the increase in energy consumption. From a master planning approach however, the most significant factor was the limited space within the central plant and the difficulty of installing the required equipment for the thermal storage system while still leaving space for future expansion.

Colorado College has decided that the new centrifugal chiller was the preferred option at this time. They also preferred to convert the plant to a primary/secondary pumping system. SEC performed a hydraulic analysis of the existing chilled water system and determined that the existing distribution pumps were adequate to support the new chiller and the current campus loads. Therefore due to budget constraints, the conversion to a primary/secondary distribution system will be included in a future phase of the central plant expansion. 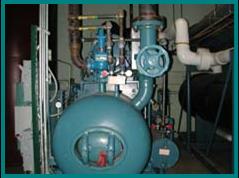