The first phase of the project involved a study of the entire campus High Temperature Hot Water (HTHW) system. Drawings of the system were not available therefore field investigation was performed to develop as-built drawings of the entire campus (HTHW) distribution and the Central Plant systems. As-built drawings were then prepared in Auto-CAD documenting field verified sizes and routing. Equipment schedules were compiled on each heat exchanger, pump, control valve, and HTHW Generator. After compiling all system data, we performing a hydraulic analysis on the system using Pipe-Flo. Master planning was provided to determine future load requirements associated with the proposed expansion projects planned over the next five (5) years. This data was also included in the hydraulic model for analysis. Cost estimates were prepared for each option and then evaluated based on a life cycle cost analysis to determine the best method of meeting future flow requirements. A list of recommended modifications along with their associated cost was submitted to the owner for review.

The second phases of the project involved design of a portion of the distribution system modifications proposed in the study. This phase of the project involved looping the north and south mains together to improve reliability and peak flow conditions, increasing the pipe size in portions of the tunnel, and replacement of some direct bury piping that was in poor condition. The project involved installation of 1,500 L.F. of direct bury distribution system utilizing an insulated Class A conduit system with a fiberglass outer jacket. The Tunnel piping modifications required replacement of 1,100 L.F. of 4” piping with 6” piping and replacement of 800 L.F. of 6” piping with 8” piping. The crawl space of one building was utilized to install 700 L.F of 3” and 4” piping. A 4 day shutdown of the central plant was coordinated and scheduled to install temporary tie-ins that were designed to eliminate further down time of the system throughout the remainder of the project. 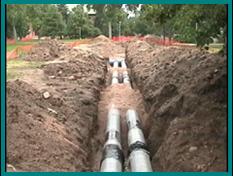 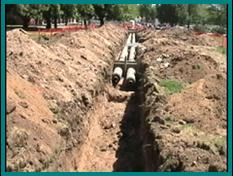 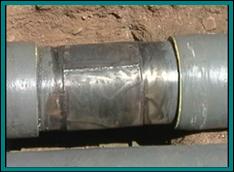 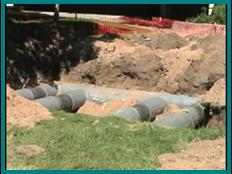